Lingam” is one of the most misunderstood motifs of Hinduism. It has been subject to such a bad smear campaigning by Westerners, especially missionaries, which even Merriam-Webster dictionary defines it as a stylized phallic symbol. 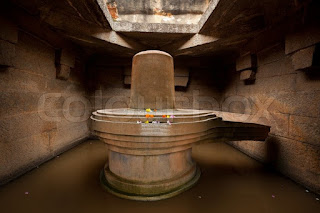 The expression ‘linga’ in the Agama context signifies ‘symbol’ (chinha). Derived from the root ‘ligi gatyau’, it refers to movement, and words having been movement as their etymological meaning have also connotations of knowledge (‘sarve gatyarthah jnanarthah’). Linga therefore means that by which the Divine is cognized or approached (‘lingyate jnayate anena iti lingam’).

The Agama texts also bring out another valid explanation for the word ‘linga’: linga in its primary sense is broken up into ‘ling’ (to dissolve, to get merged, to destroy) and ‘ga’ (to emerge, to go out). Linga is so called because all phenomena are dissolved in Siva at the time of cosmic dissolution, and it emerges from Siva once again at the time of creation. (Ajitagama, 3, 16-17).

Thus Shiva Linga represents the mark of the cosmos.

Swami Vivekananda gave by far the best rebuttal to Western claims that it might be a symbol of phallic worship, by giving proof from the vedas.

Swami Vivekananda gave a lecture at the Paris Congress of the History of Religions in 1900 during which he refuted the statements of some Western scholars that referred to Shiva linga as phallic worship.

Vivekananda’s words at the congress were in connection with the paper read by Mr.Gustav Oppert, a German Orientalist, who tried to trace the origin of the Shalagrama-Shila and the Shiva-Linga to phallicism. To this Vivekananda objected, adducing proof from the Vedas, and particularly the Atharva-Veda Samhita, to the effect that the Shiva-Linga had its origin in the idea of the Yupa-Stambha or Skambha—the sacrificial post, idealized in Vedic ritual as the symbol of the Eternal Brahman. 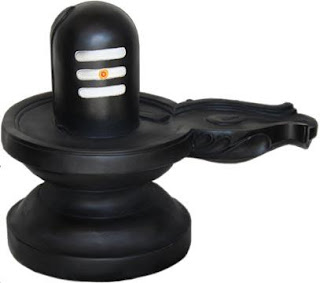 Swami Sivananda, also explains why equating Siva Lingam with the phallus is a mistake. According to him, “This is not only a serious mistake, but also a grave blunder. In the post-Vedic period, the Linga became symbolical of the generative power of the Lord Siva. Linga is the differentiating mark. It is certainly not the sex-mark. You will find in the Linga Purana:

“Pradhanam prakritir yadahur-lingamuttamam; Gandhavarnarasairhinam sabda-sparsadi-varjitam”
—The foremost Linga which is primary and is devoid of smell, colour, taste, hearing, touch, etc., is spoken of as Prakriti (Nature).”

Bana lingam (One kind of Shiva linga )
The Bana Lingam is a most Sacred Symbol and Divine Energy Tool, both in the ancient and in this modern world. The Bana Lingas are Swayambhu Shiva Lingas that have taken shape in the Sacred Narmada River, in the Central Western part of India. This is why the Bana Lingams are also known as the Narmada Banalingas or Narmadeshwar Shiva Lingas.The Narmadha Bana Lingas became very famous throughout the world, after the film “Indiana Jones and the Temple of Doom” was screened : this is the very same Sacred Stone that they were searching for .
The story:There is a story narrated in Aparajita-pariprchchha (205, 1-26) about the origin of the bana-lingas and their association with the Narmada river. Siva wanted to destroy the ‘tri-pura’, which had been obtained as a boon by the arrogant demon Banasura, and he let go a fiery dart from his great bow ‘pinaka’. The dart broke the three ‘puras’ into tiny bits, which fell on three spots: 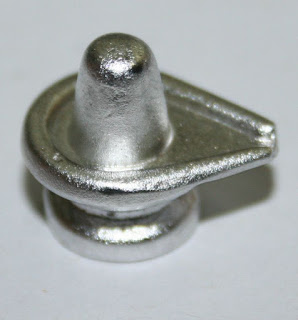 1, on the hills in Sri-kshetra (of unknown identity),
2, on the peaks of Amarakantaka in the Vindhya ranges, and
3, on the banks of the holy river Narmada. The bits that fell in these places soon multiplied into crores,. each bit becoming a linga. As they formed part of the possession of Banasura, they were called Bana-Lingas. 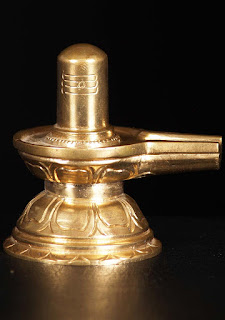 It is the considered view of many researchers and geologists that the unique composition of the Narmadha Shiva Lingas was due to the impregnation of it’s rocky river-sides and the rocks in the river bed, 14 million years ago by a large meteorite that crashed into the Narmada River. The fusion of the Meteorite and the Earthly Minerals has spawned a new and unique type of Crystalline Rock with extraordinary energetic qualities – the Narmada Bana Lingam. The bana Lingas contain Crypto Crystalline Quartz (masses made up of either fibrous or granular aggregates of tiny, microscopic Quartz Crystals) and a Gemstone material called Chalcedony (with an iron oxide and geothite inclusion) alongwith Basalt and Agate – this unique composition coupled with elliptical shape has a precise resonance in alignment with our Energy Centers or Chakras and are used for thousands of years as Divine Energy Generators for Cleansing, Healing and for Meditation. The Narmada Bana Lingas are quite strong and the hardness is a 7 on the Moe’s Scale, one of the highest frequency vibration rates of all stones on earth. The vibration of bana linga is said to be perfect for purification purpose. 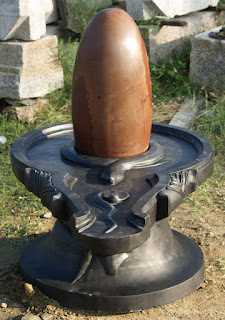 Thus Matsya-Purana (Chap. 165-169), truly said drinking the water from this river (Narmada) and worshipping Siva (Bana Lingam) will secure freedom from all states of misery.